HomeJCUA’s Congregation Partner Network is Getting Out the Vote!

We are excited to be working with our six Chicago-based Congregation Partners – to get out the vote in the Jewish community this election cycle.

Our Congregation Partners have:

“Corrosive cynicism and irrelevant idealism sound like two very different things, but spiritually, they function in the same way. Both of them take us out of the action.”

“Elections impact the day to day lives of every person in society. Just like tefillin, our vote matters not only on the day of the election, but every day after it until the next one.”

If you are a member of Anshe Emet Synagogue, Beth Shalom B’nei Zaken Ethiopian Hebrew Congregation, Emanuel Congregation, KAM Isaiah Israel, Mishkan Chicago, or Temple Sholom and want to get plugged into what your congregation is doing around the Municipal Elections, reach out to Anna Rubin at anna@jcua.org 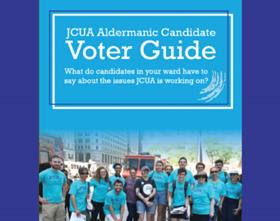 P.S. The above blog posts, JCUA’s voter guide, and more general information and resources on voting in the February 26th Municipal Elections can be found on the: JCUA Civic Engagement Page