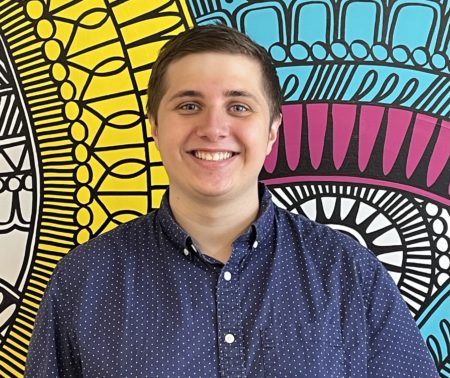 Greetings, JCUA community!  My name is Jonah Karsh (he/him), and I’m thrilled to be joining JCUA this year as the Avodah Youth Organizer.

I grew up in Evanston and have been a member of the Jewish Reconstructionist Congregation (JRC) since I was 5 years old, just after finishing preschool there.  Some JCUA veterans may also know my parents, Josh Karsh (he/him) and Carolyn Shapiro (she/her), who both served on JCUA’s board in the late 1990s and remain involved in progressive causes in the Chicago area.

I’ve just moved back to the area after graduating last spring with a degree in Jazz Piano Performance from the Frost School of Music at the University of Miami in Florida.  As I was graduating high school, I was convinced I wanted to be a professional musician.  However, soon after arriving at UM, I discovered that the progressive Jewish communities that I cherished at home were nowhere to be found in Miami, and that I could not sustain myself on musical nourishment alone.

In search of such a progressive Jewish community, I founded a chapter of J Street U, a national network of students organizing their campuses to fight for peace, democracy, and human rights for all Israelis and Palestinians.  This experience was transformative: through relentless on-the-ground organizing, I found other students, Jewish and non-Jewish, who were also yearning for a place where they could practice their progressive values.  Together, we created that community, and J Street U Miami, as well as my time serving on J Street U’s National Board, were the defining experiences of my college years.

As I was devoting more and more time to J Street U and less and less time to practicing the piano, I realized that while I wanted music to remain a major part of my life, political and community organizing were how I wanted to spend my professional time.

After years organizing mostly on foreign policy issues, I’m super excited to work locally, where I am more proximate to those most impacted by the injustices I’ll be fighting.  I also can’t wait to meet more of our youth members and learn from the energy and moral clarity that they seem to bring to every issue.

Off the clock, I love to root for the Bulls, eat copious amounts of cheese, hear live music, and spend time with my favorite people.  And JCUA members are some of my favorite people – please reach out to me at jonah@jcua.org for a 1:1 conversation: I’d love to get to know you better so we can build the world as it should be!